The available data for the Québec City census metropolitan area (CMA) was given special treatment (three-month moving average) due to the small sample size, which mitigated the strong fluctuations in the data. The current situation causes extreme variations which cannot be fully observed with this data. Furthermore, this data provides insight on the trend over the past three months. Thus, the data collected in March and April influenced the estimations published for the month of May. Please note that we use comparable data for the province of Quebec and the other CMAs in this document.

The Labour Force Survey’s (LFS) data for May was collected from respondents during the reference week of May 10 to 16. For reference, the data for the month of April was collected from respondents during the week of April 12 to 18. In between these two periods, some economic sectors were authorized to resume their activity. Starting May 4, retail stores with direct exterior access were allowed to reopen. On May 11, all construction sites and some manufacturers were allowed to resume operations. These were captured in the data for the month of May. However, the full reopening of the manufacturing sector, on May 25, will only be observed next month.

Statistics Canada’s definition of “unemployment” is based on the activity of job search and the availability to take a job. Therefore, the definition of unemployed people are those who, during the reference week of May 10 to 16, were available to work and: 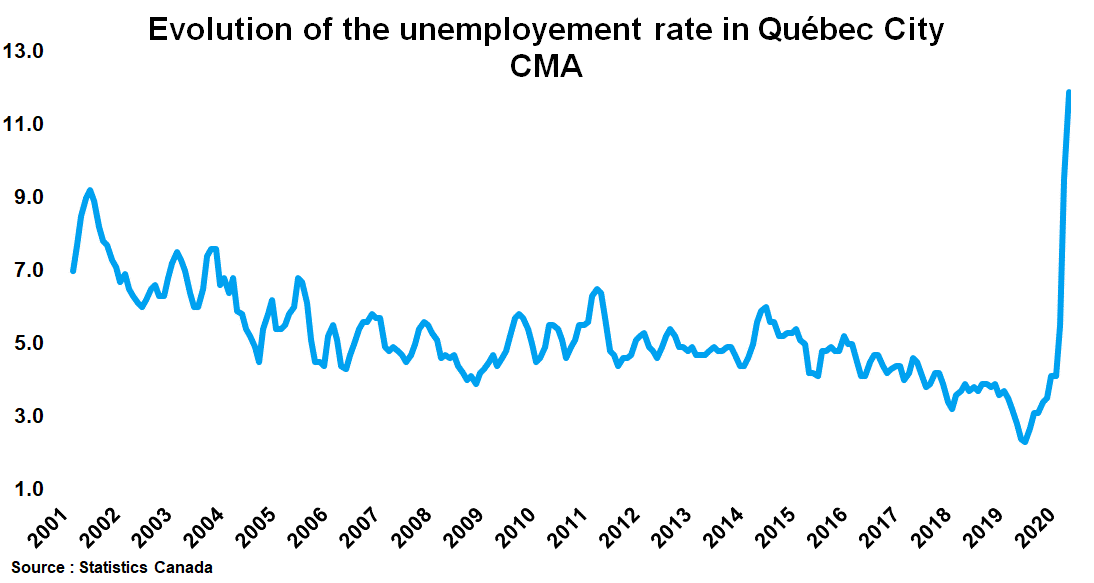 Quebec’s economy is slowly picking up, subject to the evolution of the pandemic. The restrictions on activities and services are being lifted, setting the pace for the region’s labour market recovery. However, the economic recovery is happening gradually, and we will only be able to measure the results in the coming months.

The data regarding variations in employment at the CMA level is softened by the statistical treatment applied due to the small sample size. The numbers published by Statistics Canada for the metropolitan areas in May are in fact the averages of the last three months. This treatment, normally necessary, mitigates the extreme variations that are the norm during these exceptional times.

Therefore, based on the last three months’ average, Statistics Canada estimates that there were 383,600 people employed in the region in May, 16,400 fewer than the previous month (-4.1%), continuing the downward trend attributable to the pandemic, for a total loss of 54,700 jobs (-12.5%) compared to the beginning of the crisis (February 2020). Meanwhile, the number of unemployed people rose by 10,100 people in May (+24.2%). Compared to February, this number grew by a factor of 2.7, which represents an increase of 33,200 unemployed people (+177.5%). The exceptional circumstances seem to have a significant impact on the number of active workers in the labour market. In this regard, in May, the labour force decreased by 6,300 individuals (-1.4%), for a total drop of 21,500 workers (-4.7%) since the economy was brought to a halt, bringing the region’s labour force to a low of 435,500 people.

Nevertheless, we must take into account that the monthly data for the Québec City CMA offers an incomplete view of the impact of COVID-19 due to continued development and complex effects of the pandemic.