The available data for the Québec City census metropolitan area (CMA) was given special treatment (three-month moving average) due to the small sample size, which mitigated the strong fluctuations in the data. The current situation causes extreme variations which cannot be fully observed with this data. Furthermore, this data provides insight into the trend over the past three months. Thus, the data collected in May and June influenced the estimations published for the month of July. Please note that we use comparable data for the province of Quebec and the other CMAs in this document.

The Labour Force Survey’s (LFS) data for July was collected from respondents during the reference week of July 12 to 18. Let us recall that the data for May was collected from May 10 to 16, as reopenings were going strong, while the data for June was collected during the week of June 14 to 20. On June 25, public health authorities further lessened the restrictions which, from that day on, were limited to large events and regular vacation camps with accommodation. Consequently, this gradual lifting of restrictions is reflected in the results of the past three months, especially in July.

Statistics Canada’s definition of “unemployment” is based on the activity of job search and the availability to take a job. Therefore, the definition of unemployed people is those who, during the reference week of July 12 to 18, were available to work and: 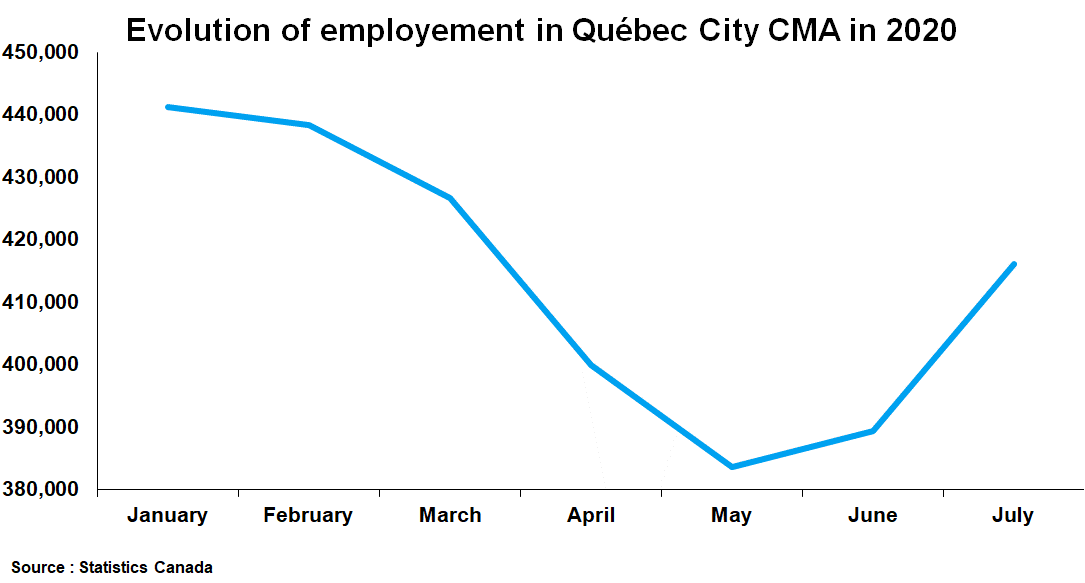 Statistics Canada’s Labour Force Survey (LFS) for the month of July reports on the average situation in the labour market for Canadian CMAs over the months of May, June and July, during which period the lifting of restrictions accelerated, following a gradual start in April. Thus, the positive results registered in July in the Québec City CMA reflect the labour market recovery after the pause caused by the coronavirus and the efforts made to slow its progression. Nevertheless, the region’s labour market still has a long way to go until it reaches the same level as before the beginning of the crisis (February 2020).

In July, the number of people employed in the Québec City CMA increased by 26,700 (+6.9%) compared to the previous month. This second consecutive monthly increase brought the number of people employed in the region to 416,200. Despite this growth, the region registered a deficit of 22,100 jobs (-5%) compared to the level observed in February 2020 (438,300 jobs). The unemployment rate fell for the first time since the beginning of the crisis, reaching 8.6% in July, the lowest rate among major Canadian CMAs. Note that such a high unemployment rate was hardly conceivable in February as the region’s unemployment rate had been consistently below the 5% threshold since February 2016. The drop in the unemployment rate in July is explained in part by the decrease of 13,400 unemployed people compared to June, bringing this total to 39,400. Despite all this, the number of unemployed people remains twice as high as in February 2020 (+110.7%), when there were 18,700 unemployed people. The economic upswing also affected workforce participation in the labour market. In that regard, Statistics Canada revealed that there were 455,600 people in the labour force in July, 13,300 more (+3%) than the previous month. The region’s participation and employment rates both increased in July, reaching 65.9% (+1.9%) and 60.2% (+3.9%), respectively.

According to the LFS, employment in the accommodation and food services sector registered significant gains in July in the Québec City CMA. In any case, the pandemic and the restrictions put in place to deal with it transformed the reality in all industries. Most service industries did not regain the same level as before the crisis (February). In the goods-producing industry, the trend is more mixed. For instance, compared to February, employment grew in the construction industry, while it declined in the manufacturing industry.